In the the New Year Holidays Santa Claus of Club is traveling to Riga, wishes Happy New Year and wishes of prosperity, good health and prosperity to all
Diplomatic Economic Club®
29.12.2012 (4350)

Congratulations on Christmas and New Year 2013

Appointments: new Counsellor of the Hungarian Embassy in Tripoli 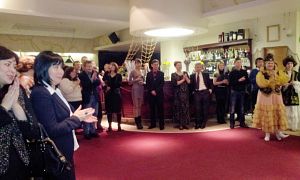 Ambassador of Slovak Republic in Club

Product 2012 in Latvia from Israel

Traders Association of Latvia in cooperation with the Embassy of Israel held a competition and the awards ceremony the «Product 2012 in Latvia from Israel».
Diplomatic Economic Club®
06.11.2012 (5236)

Reception of the Embassy of Hungary

On the 23rd October 2012 in Riga in the Latvian Academy of Music the reception organised by the Embassy of Hungary in Latvia took place.
Diplomatic Economic Club®
23.10.2012 (3535)