The Turkish Embassy is organizing an exhibition entitled „Impressions of Istanbul“ at the Blackheads House in Riga from 8th April to 13th May 2011 with the participation of 42 Turkish contemporary artists. The exhibition features Istanbul through various perspectives and impressions of the artists, and reveals the city’s character with highlights of its current daily life as well as its history.
Diplomatic Economic Club®
09.03.2011 (7966) 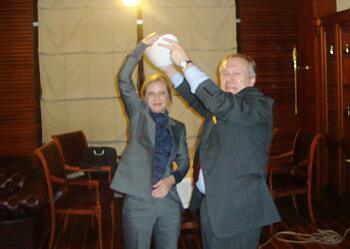 On January 27th in Gallery Park Hotel Pavel Bredihin held a meeting of the Club due to the end of his business trip as Second Secretary of the Embassy of Russia in Latvia.
Diplomatic Economic Club®
27.01.2011 (6175)