The monument on Lucavsala island in Riga

With the initiative of Riga Business Club, and participation of the Embassy of Russia in Latvia, on the 10th July there was held a ceremony of laying flowers at the monument to Russian soldiers died in Lucavsala in 1701. 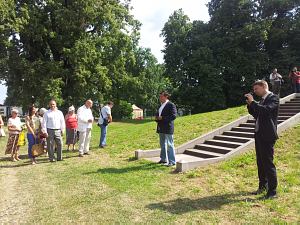 Tragic incident in the local history happened in the beginning of the Great Northern War, when Swedes gained the victory over Saxons, and decided to get rid of Russians, who eventually were left on the island without any help.

Swedish army was bigger in size, and therefore hoped to win easily, but that didn’t happen. The turmoil was so big that even Karl XII came over, and then saw lots of his soldiers died and injured, and twenty of Russian soldiers there in the redoubt shooting at their enemies.
The king was inspired by their braveness so much that ordered not to kill them, but to capture only. The other Russian soldiers, who were already killed in the fight, were buried at the first fraternal cemetery in Riga. 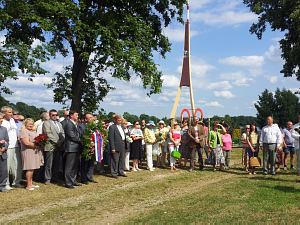 For a long time in that place there were windmill ruins with the sign in German telling that near here there was a burial of Russian soldiers. The monument, which stands in this place these days, was built in 1891.
In 2003rd Riga Business Club collected the money and renovated the monument – six meters high Finnish granite monument , which brings to mind the Orthodox Church.On one side there is the Peter’s the First monogram from the 1701 date, on the other side the Alexander’s the Third monogram from the Year 1891.

Text on the monument:
« On 10th July 1891 this monument should be built on the donations of the Governor-General M.A. Zinovjev. In the memory of 400 Russian soldiers killed on 10 July 1701 defending the Island.» 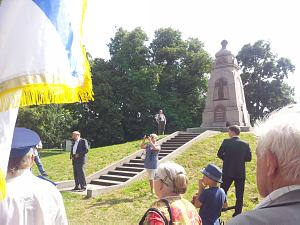 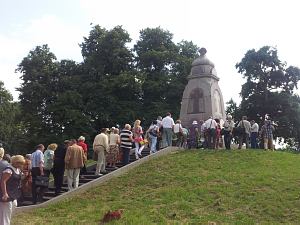