The CMS particle detector has yielded data that might point to a phenomenon previously only detectable through the collision of heavy ions. The unexpected observation has especially given the theoretical particle physicists cause for thought. 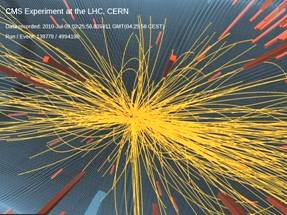 The CMS experiment at the Large Hadron Collider (LHC) has notched up yet another success: during the collision of proton beams with a centre-of-mass energy of 7 TeV, an unexpected phenomenon was detected with the help of the silicon pixel and strip detector.
A good deal more particles were produced during the proton collisions than usual – instead of the typical 20 to 30, the researchers are talking about a hundred or more. The particle pairs produced in the process exhibited properties never before observed in proton-proton collisions. „Similar structures were previously only known from the collision of heavy ions – like gold or copper atomic nuclei – in the RHIC (Relativistic Heavy Ion Collider) at Brookhaven National Laboratory in the US“, says ETH-Zurich professor Günther Dissertori, the Deputy Scientific Coordinator of the CMS experiment.

Images and animations of some of the first collisions in CMS can be found on the CMS public web site: https://cms.cern.ch.

CMS is one of two general purpose experiments at the LHC that have been built to search for new physics. It is designed to detect a wide range of particles and phenomena produced in the LHC`s high-energy proton-proton and heavy-ion collisions and will help to answer questions such as: „What is the Universe really made of and what forces act within it?“ and „What gives everything substance?“ It will also measure the properties of well-known particles with unprecedented precision and be on the lookout for completely new, unpredicted phenomena.
Such research not only increases our understanding of the way the Universe works, but may eventually spark new technologies that change the world in which we live as has often been true in the past.

The current run of the LHC is expected to last eighteen months. This should enable the LHC experiments to accumulate enough data to explore new territory in all areas where new physics can be expected. The conceptual design of the CMS experiment dates back to 1992.
The construction of the gigantic detector (15 m diameter by nearly 29 m long with a weight of 14 000 tonnes) took 16 years of effort from one of the largest international scientific collaborations ever assembled: more than 3100 scientists and engineers from 169 institutions and research laboratories in 39 countries all over the world.