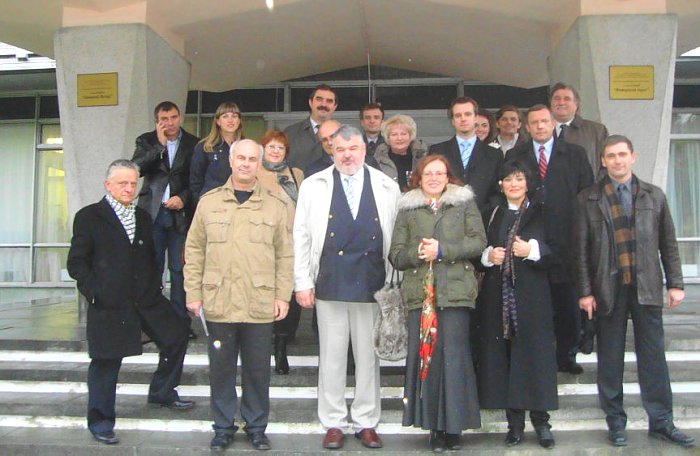 October 14, Members of the DEC visited the sanatorium «Jantarnij bereg» that is located in Jurmala. Sanatorium belongs to the administrative department of the Russian president and refers to the structure of the health complex «ROB».
The trip to the Past and to the Future was organized by the director the sanatorium Victor Danilokh. He manages the governing health institution since 2003.
Mr Daniloh presented the history of the Riga seaside resort and the sanatorium «Jantarnij bereg», that took a significant place in the recreational sector of the Soviet Union and Latvia. 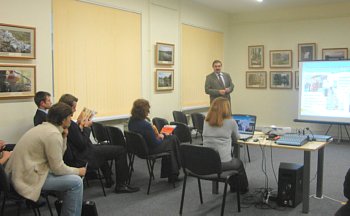 The first guests went to «Jantarnij bereg» in May 3, 1973. It was considered as an upper class resort in the Baltic’s. In addition to the main building of the sanatorium a cottage „Baltic Breeze“ was built where the top management of the USSR had a rest.
More than 100 thousand people benefited from the services of health resort. In 2009 the sanatorium received 5 thousand guests from 15 countries. 70% of them are residents of Latvia, 20% — Russians, the rest are from Germany, Israel, Ukraine, Ireland, Canada, USA, Australia, etc.
The sanatorium «Jantarnij berege» is famous for its hydrogen sulfide baths and the Kemer mud cure. In addition, it is proposed a number of other procedures, including lymphatic drainage on the unit Presomed 2900.

B. Daniloh called the main differences between «Jantarnij bereg» and the competing sanatorium Jaunkemeri which is mainly a rehabilitation center for treatment after hospital, however, «Jantarnij bereg» offers preventive health measures.
At the sanatorium can rest and heal 200 people at the same time. At their disposal are 105 rooms of different price categories: from 38 to 67 euros per person per day. This amount includes accommodation, meal, medical consultation and treatment procedures. Part of the medical and beauty services are available for extra cost.
V.Daniloh demonstrated the medical building, treatment rooms, a complex of pools, number of rooms. The museum has the history of the resort of Jurmala, some types of equipment that were used in the 20th century.
The cottage «Baltic Breeze» was built for the leaders of the Soviet country, and now we have the opportunity to see the suites, lounges and work rooms for watching movies and a library of those times. No luxury items, everything is very simple according to our modern standards. 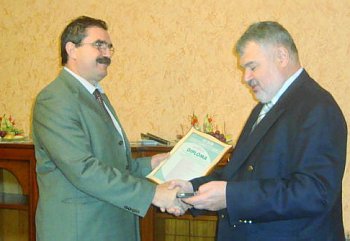 Pavol Baranay, president of the Club, awarded Victor Daniloh with the Honorary Diploma of the Club, thanked for the informative meeting and wished him success in development.

Visiting a cottage is a tourism program called „SOVIET PARTY. A trip to the country of the Soviets. " We will not reveal all the secrets of this excursion into the past. We can only say that the Members of the DEC were able to meet with Comrade Brezhnev (in which we could hardly guessed a familiar artist of the Riga Russian Theatre Dmitry Pales), and even make a group picture on the memory. And a lunch of the special menu in the dining room gave the state to the program of the tour.
The meeting was held in a very friendly atmosphere of the era where the return is not possible. The audience appreciated the sanatorium so that some diplomats wished to come to the «Jantarnij bereg» once more in order to have a rest and gain strength for further work on international soil. So, the parties succeeded in mutual understanding.