Kazakhstan evening in the Diplomatic Club 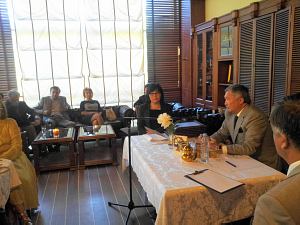 On the 11th June the Ambassador of Kazakhstan in Lithuania and Latvia H.E. Mr Baurzhan Mukhamedzhanov visited Diplomatic Economic Club as a guest. At the meeting in the business centre

A contemporary art exhibition, which was specially brought to Riga from performe Kazakhstan was presented at the meeting. The group called „Essence of dance“ showed a small dancing performance.

The Ambassador of Kazakhstan Mr Baurzhan Mukhamedzhanov told to the guests about the development of Kazakhstan, Latvian and Kazakh trade-economical relations, replied various questions from the guests of the meeting. 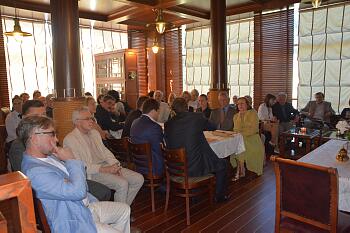 Kazakhstan is the 9th country in the world by the territory, and it’s population is 17 million inhabitants. It is one of the countries, which population is currently growing (in the beginning of the 90-ties it was 13 million).

GDP per capita in the beginning of the 90-ties was 700,- USD. The major growth of GDP was reached in 2005 – 13% increase. Currently GDP grows 6-7 % per year. Country managed to combat unemployment, and currently it is 5-6% (after the collapse of the USSR 60% of the population was unemployed).

Foreign direct investments to Kazakhstan economy were 200 billion USD during last 20 years. The first place among the major investors belongs to the USA, second – EU, third – China, and the forth – Russia.

Kazakhstan is known by its oil and gas resources – the main resources necessary for the economic development. Oil and gas, which are extracted in Kazakhstan, helped to make smoother stroke on country’s economy during the crisis. Part of the resources kept and intended for the needs of the next generations were transferred during the crises to rescue the banking system. 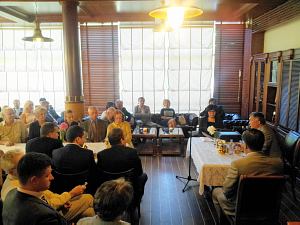 Mr Baurzhan Mukhamedzhanov noted that Kazakhstan is located between two great countries – China and Russia, but the main economical partner of the country is European Union. Trade turnover with the EU makes 60 billion USD, while with China 28 billion, and with Russia – 23 billion

The customs Union with Russia and Belarus, as well as the recently created Economic zone agreements are signed only for pragmatical reasons, as noted the Ambassador. There are no countries in the world with which Kazakhstan has tensions. He noted that Kazakhstan has exceptional relations with EU and China. 36% of oil and gas in Kazakhstan are producing Chinese companies, taking part in the development of country’s social structure.

Talking about the Baltic States, H.E. Ambassador paid attention to the point that Latvia is the main economic partner of Kazakhstan in the field of transport and logistics, promoting together with China and Russian Federations the idea of the new Silk Road. Baltic ports have importance for the Silk Road project. There are representative offices of the Kazakhstan Railway in Latvia and Lithuania. 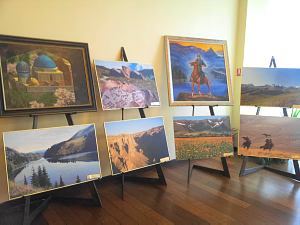 Referring to Mr. Mukhamedzhanov, Kazakhstan is ready to work with every Baltic port, which will offer better conditions for transportation. As an example was mentioned ferroalloy cargoes, which previously were transported through Klaipeda port. However, Riga port offered better conditions, and currently 600 000 tons of these cargoes are transferred through Riga.

Latvian Businessman have interest in co-operation with Kazakhstan. This was clearly seen during the visit of the Latvian president Mr.Andris Berzins to Astana. At the meeting Mr.Ambassador also told about program for youth to study abroad, which is called „Future“. Currently there are 100 students from Kazakhstan studying in Riga.

According to the program of industrial development there is planned to build 400 new factories in 5 years. 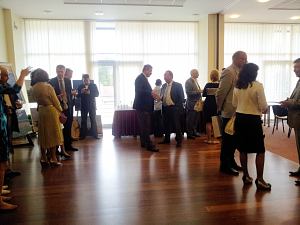 Mr. Ambassador reminded that Kazakhstan is getting ready for the worldwide exhibition EXPO 2017, which will take place in Astana under the motto Energy of the future.

Participants of the meeting had questions about the possibility of direct flight from Riga to Kazakhstan. The Ambassador noted, that currently the project of the air route Riga-Astana-China is in process. If it will be realised that could make a big impact on the development of tourism and cultural relations between Kazakhstan and the Baltic states. 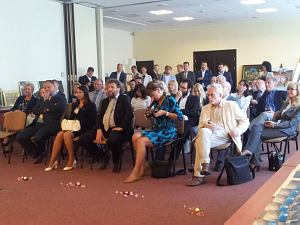 Mr Baurzhan Mukhamedzhanov replied various questions, and after handed the Diplomas for the contribution in developing co-operation with Kazakhstan to Latvians, who are actively doing that. President of the Diplomatic Economic Club, Mr.Dawid Tomaszewski presented the Honorary Diploma and the Card of the Club Member to the Ambassador.

Members of the Club and the guests — Deputies of Riga and Jurmala city councils, businessmen and press took part in the meeting.

Diplomatic Economic Club thanks the Embassy of Kazakhstan, and the Counsellor of the Embassy Mrs.Zhazira Myrzakassimova for the joint planning and support in organising the meeting. 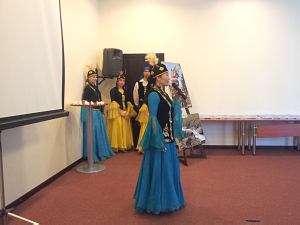 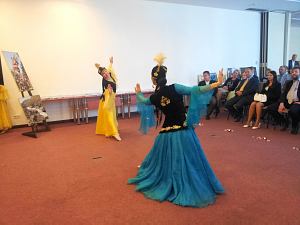