Flowers laying at the memorial on Lucavsala Island 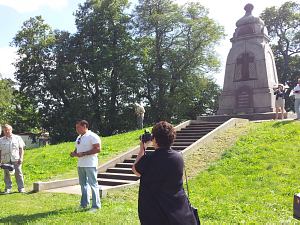 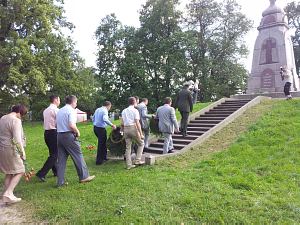 Tragic event in local history happened at the beginning of Northern War, when Swedes after winning the Saxons decided to get rid of Russians, who was on Lucavsala Island without any help. Strength Swedish army hoped to win quickly, but it turned out otherwise. There was such a bustle, that when king Charles XII arrived, he saw a lot of his soldiers dead and 20 Russian soldiers firing back in redoubt. King was admired by the boldness of Russian soldiers and commanded to take them prisoners. Killed soldiers made the first common grave in Riga.

Long time there were ruins of windmill with a plate about the common grave on that place. Memorial was built on Lifland’s governor-general Zynovjev initiative. 6 meters high monument from Finnish granite reminds the Orthodox Church. There is Peter the Great monogram from one side and Alexander the III monogram from the other side. Inscription on a monument:
«On July 10, 1891, the monument was built on Lifland’s governor general Zinovjev donations. In 400 Russian soldiers fallen in July 10th, 1701 memory».