Reception of the Embassy of Hungary 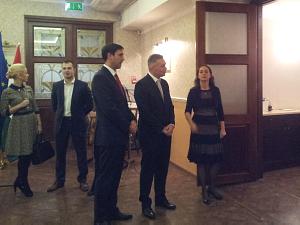 October 22, the Hungarian Embassy in Latvia hosted a reception on the occasion of the 58th Anniversary of the 1956 Revolution and Freedom Fight.

Ambassador of Hungary to Latvia Mrs. Adrien Muller greeted by the guests on the occasion of anniversary, wished prosperity, success and prosperity the peoples of Hungary and Latvia. 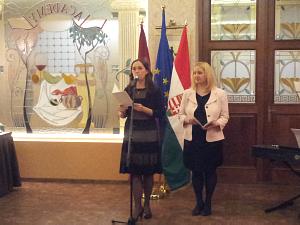 Ambassador of Hungary Mrs. Adrien Muller:
«The Hungarian revolution and freedom fight in October 1956 was clear evidence of the intention and deep wish of Hungarians to be free as people and independent as a nation. The uprising of October 23rd quickly united the nation and showed the strength of common hope.
The events after 23 of October 1956 are well known today. The defeat of the Hungarian revolution was one of the darkest moments of the Cold War. The events of October 1956 and the consequences were significant for Hungarians. However, the mere public mention of facts surrounding the 1956 revolution was a brave act over the following three decades. But even at that time all Hungarians and many people in the world knew that 23 October is a symbol of freedom, independence, hope of a nation.
Looking back we understand how important the Hungarian fight for freedom was, the sacrifice of the people on the streets on October 23rd 1956 in our common history taking us to 1989, to the end of the Cold War and to the independence of Eastern Europe.
Here in Latvia there is no need to explain what the hope for freedom means. Latvians know.
Today we are proud to be free and independent, and at the same time to belong to a Community with democratic values and principles. These unite us and give our strength. I believe that our future is to preserve and spread these values and we all are working for that.
I would like to thank all of you for celebrating with us, with Hungarians, with Europe the Hungarian revolution of October 23rd 1956.» 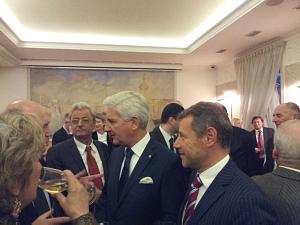 Czech Ambassador Pavol Sepelak, Ambassador of Switzerland Marcus Dutly , Ambassador of France Stephane Visconti and other guests at the reception of the Hungarian Embassy in Latvia 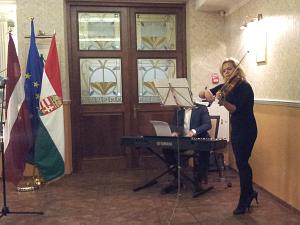 At the reception sounded Hungarian melodies performed by two young, talented musicians: Ottó Kovcsi and Veronica Sorokovich. They are both musicians and music teachers from Riga.