On the 9th October Diplomatic Economic Club held a meeting with an expert in international investments „Logistics in Wallonia“ Jean-Christophe Staelens and an Ambassador of Bangladesh, Dr.Saiful Hoque
The meeting was opened by the president of the Club Mr.Dawid Tomaszewski, who introduced the guests.

Mr. Jean-Christophe Staelens is a former member of the Board of CETIM Corporation, which is focusing its business on institutional investments in real estate in continental Europe. 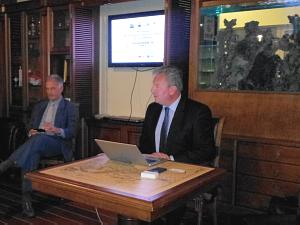 „Logistics in Wallonia“ supports strengthening of Wallonia’s positions with international institutional investors, takes part in infrastructural and logistical projects. It supports Wallonia in partnership relations and absorption of transport and logistical companies on international level.

Olga Pavuk chief editor of the magazine The Baltic Course notes that if one looks at the map, they can notice that Wallonia is located in the busiest transport zone in Europe. Mr.Jean-Christophe Staelens stressed that region’s development strategy is connected with multimodal transport hubs. These are container terminals in the ports of Liege and Athus, and developed network of railways and highways, which connects UK, Germany, France, Spain and Italy, as well as 2 (two) freight and one passenger airport. He was also noted that there is a bimodal terminal with a unique lift on the canal Mons-Ghlin, which allows vessels and barges to be lifted from one level of the channel another for up to 73 meters.

Small region with great opportunities, — such a characteristic was given to Wallonia by Mr. Jean-Christophe Staelens. Wallonia is the region with lots of opportunities for the multimodal logistical platforms. Small territory of Wallonia has population 3.5 million and beneficial business conditions, which are presented to every investor by the individual program.

Mr. Staelens paid attention to the point that for Wallonia Latvia is considered as an important hub with great potential which has exits to different European, American and African countries. Wallonia and Latvia are transit territories, and Belgian region’s example is very important for the development of transport network of the both logistical zones. 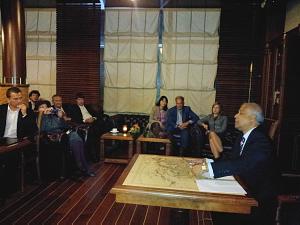 The Ambassador of Bangladesh with accreditation in Latvia, Lithuania, Estonia, Ukraine and Belarus , Dr. Saiful Hoque is also a counselor of the Center for Culture, Science and Information of Bangladesh in Saint-Petersburg, Russia.
He has studied in the USSR, Ukraine, in Kiev, and was reading lectures in the Peoples’ Friendship University in Moscow.

Dr. Saiful Hoque told the guests about trade and economic development of his country.

The country of Bangladesh was formed in 1991, after 23 years of the military regime, starting in 1991 the democratic way of development. Currently, government is stable, and the Prime Minister Sheikh Hasina attracts investors from all over the World. The world economic crises didn’t affect the country, and its economy is growing for 6.5% annually. 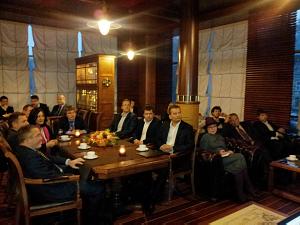 The country has two big ports at the Bay of Bengal with container delivery time to Hamburg port approximately 25 days.

Bangladesh has significant deposits of natural gas. US Chevron Corporation and Russian Gazprom are taking part in the developments of this resource. Russian company Rosatom is building a nuclear power plant in the country.

Ambassador noted that probably soon there will be opened Bangladesh Embassy in Riga, what will positively affect connections between our countries.

The Ambassador of Bangladesh was granted membership in the Diplomatic Economic Club.

President of the Club Mr.Dawid Tomszewski thanked guests for an interesting presentation, and wished success to everyone.