On April 20, the first meeting of the Business Council of Entrepreneurs of Latvia and Uzbekistan took place. Companies, partners and club members took part in the council meeting. 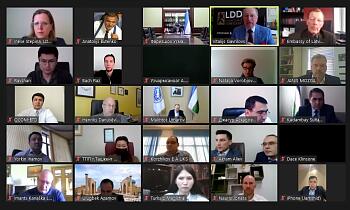 The first meeting of the new business council of entrepreneurs of the two countries was held on the eve of the meeting of the intergovernmental commission on business cooperation between Latvia and Uzbekistan.

The meeting was opened by V. Gavrilov, President of the Latvian Employers’ Confederation (LDDK).
Speeches were made by the Ambassador of Uzbekistan to Latvia K. Sultanov, Ambassador of Latvia to Uzbekistan M. Popkov, co-chairs of the Business Council of Latvia and Uzbekistan J. Mozga and F. Usmanov.

It was noted at the meeting that Latvia for Uzbekistan is one of the three leading partners from the European Union, where Germany and Italy occupy the first positions.
At the meeting, presentations were held, an exchange of views took place on the development of mutually beneficial economic relations, the establishment of direct ties between entrepreneurs of the countries.