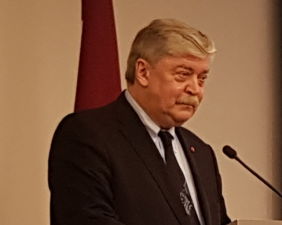 Born in 1951
In 1974, he graduated from Leningrad State University.
He speaks English and French.
He has the class rank of Acting State Advisor of the Russian Federation, Class 2, awarded in January 2009.

1974 — translator, senior engineer-translator of the Research Institute «Impulse».
1981-1984 — Deputy Secretary of the Board of the Leningrad Organization of the Union of Journalists of the USSR.
1984-1990 at diplomatic work in the USSR Ministry of Foreign Affairs
1987-1990 — Deputy Representative of the USSR Ministry of Foreign Affairs in Leningrad.
1990-1991 — Deputy Director of the State Hermitage Museum, Leningrad.
1991-1993 — Vice-rector of the International Institute for the Development and Training of Banking and Exchange Activities, St. Petersburg.
1993-2006 — in executive positions in the banking sector (Dresdner Bank and VTB).
2006-2010 — Head of Department, Deputy Plenipotentiary Envoy of the President of the Russian Federation in the North-West Federal District, St. Petersburg.
2010-2016 — Assistant Secretary, Deputy Secretary of the Security Council of the Russian Federation, Moscow.
2016 — 03.2021 — Ambassador Extraordinary and Plenipotentiary of the Russian Federation to Latvia